Skip to content
As I said before, Mozartkugeln is a really big thing over here. To be honest I still can’t tell if it’s a tourist thing or if it’s a genuine Salzburg thing. I suspect it’s the former, since the hugest displays are in the more tourist-centric areas, but Wikipedia won’t tell me anything.
In any case, there are cardboard cut-outs of Mozart-holding-a-Mozartkugel EVERYWHERE. You cannot walk anywhere without seeing life-sized candy-schilling Mozart standing on the sidewalk, enticing you to go into a shop where the display is purely boxes and boxes of Mozartkugeln.
It’s so endearing to me, in an odd way—this army of Mozarts telling you to buy chocolate with his face on it—that I really just want to grab a Mozart cut-out one day and take it with me. I want a candy-advertising Mozart for my very own, maybe to stand next to my piano.
Here’s a picture I snapped of one Mozart I ran into while I was busy getting supremely lost for the umpteenth time around the Mozartplatz. 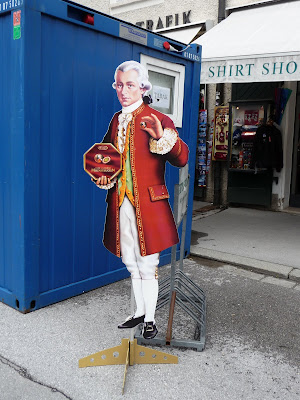 Unfortunately, I have a feeling that I would get in trouble were I to pick up a Mozart one day and walk down the street with him, and I think I would have a very hard time explaining to airport security why I had to bring a lifesized cardboard Mozart back to America.

1. The trash receptacles here are TINY. The trash compartments in my host mom’s kitchen are the size of what Americans consider desktop or counter-sized trash cans. The first time I saw a dumpster here I stopped and stared because it was so cute. You know how American dumpsters are so huge that people make swimming pools out of them? Austrian dumpsters are small enough that you can actually look down on them. Street trash cans, likewise, are tiny. My first day in the city I had a wad of tissues wedged in my pocket because I couldn’t find a single trash can, until someone pointed out that the trash cans were these little barely-two-gallon-sized cans tied to traffic poles. Despite the trash cans and dumpsters being small, they are never full. My conclusion is that Americans just produce way too much garbage.

2. Public transportation here rocks. Once I figured out the bus system (there are multiple bus lines, of course, and due to me mishearing German yesterday I got off about five stops too early and had to walk a ridiculous distance back to my host family’s house) I realized how convenient and easy it was. And the buses are clean and feel updated and well-kept. I rarely ever take American busses, but my impression of them is that they are gross and poorly maintained.

(What also threw me at first was that the busses here don’t stop at every stop if there is no one waiting to get on or off. You either get up and wait at the door before you get to your stop or you press a red button to alert the driver that you want to get off at the next stop. I was bewildered when the overhead announced my stop but the bus went barreling right past it. Now that I get it, it just seems really efficient.)

3. Mozart is EVERYWHERE. If I had a penny for every time I saw a storefront with a display of Mozartkugel, I would have enough money to upgrade to a first-class ticket back to the States. There are two big statues of Mozart in the area of the city where I go to school, and I can easily walk to Mozart’s birthplace, an apartment he lived in later, the cathedral where he worked, and I can visit where his sister is buried and the cafe where he got his coffee every day. (The cafe is still in business!) The Mozarteum, of course, is in Salzburg. There is enough Mozart-themed merchandise to make you puke, from violin-shaped bottles of Mozart liqueur to Mozart perfume. Salzburg is a city that will not let you forget that it was the birthplace of the greatest musical genius of all time.

(Also everywhere, but not to the same extent, is “The Sound of Music.” There is merchandise everywhere, there are “Sound of Music tours,” and there is a public “the making of” exhibition. I’ve been told Austrians aren’t that fond of the movie, but Salzburg is milking it for all it’s worth. For the record, I’ve already visited several places where specific scenes were shot, in addition to the abbey where the real Maria von Trapp was a nun.)