Skip to content
I once read in an interview that Martha Argerich—one of my idols—preferred playing concertos to solo piano works because she didn’t like being lonely on stage.
It seems like a mere quirk, something you’d attribute to the fickle creative type, but I’ve since discovered that to be a pianist is to be alone. Many people have told me that they gave up seriously pursuing piano because of the solitude the job entails. Although people who play other instruments also need to have a lot of solo practice time, they often work with accompanists or ensembles.
The amount of time I spend alone in the name of piano is surprising. Of course there are the countless hours of solitary practice time. There is the time spent in my room listening to recordings of pieces, by myself (for self-criticism) or by the masters (for inspiration). There is the time alone backstage or in the green room before a solo performance.
One of my piano professors, Dr. Cooper, said that at one performance during his career, as he walked onstage, he realized that he had spent more time in his life with the piano than “with any living human person.”

I had a funny realization as I watched Claudius Tanski rehearse the second Liszt piano concerto at the Großes Festspielhaus in Salzburg. (Fun fact, I played on that piano in that concert hall the day before; the acoustics were mindblowing.) Even on a stage with dozens of musicians, the pianist is alone. He (or she) sits behind the conductor’s back, totally separated from everyone else.

Conclusion? It takes someone who needs that degree of solitude in their lives to become a pianist. It isn’t necessarily a bad thing, but it’s something to consider.
Posted on June 7, 2011 by Sharon 0 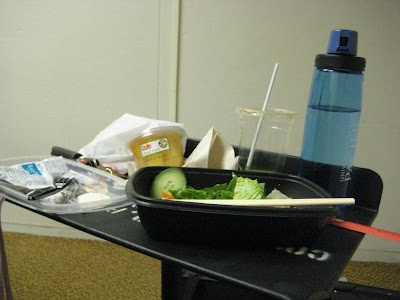 I often bring food of some sort to keep me going in the practice rooms, and I use music stands as my tables. This was from one particularly intense six-hour stint. (Not seen: a pastry and a fruit-and-nut bar.) 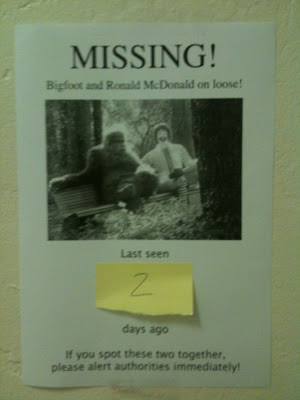