My dear readers, I bring you an obscenely late blog post with loads of extremely valuable information. For the apartment-dwelling pianists, I’ve got a how-to-esque guide on how to soundproof a door while only slightly violating your lease terms; for the perpetually lovelorn I have some romantic advice.* For all the rest of you who are curious about what I get up to, well, maybe my blog isn’t the best place to keep up, because I never update. (Ooh! Self-zing! Ouch.)

*If I’ve learned anything in life, it’s that the best love advice comes unsolicited from unconventional sources. For example, my high school pre-calculus teacher once told me that true love is when you fart in front of someone and neither of you are uncomfortable in the slightest, and, well, I suppose that’s true.

Don’t stop looking for that one perfect guy until you find someone who cares for you so much that they will 1) have no qualms about moving in with a piano practicing fanatic and 2) will take on a big DIY project to soundproof the apartment—on top of being a full-time accelerated program grad student and having a virtually full-time job, of course, because friends, your perfect guy is an overachiever. (Basically, this whole thing was more Bryce’s undertaking; I mostly stood around and took pictures.)

Also—before you go nuts sticking foam to the walls and getting sound insulation panels that cost more than your rent, 1) do some experimenting to find the weak points where sound escapes most easily, and 2) do your materials research. #1 is especially important—you could get state-of-the-art insulation for your walls and it wouldn’t make a difference if your door let all the sound through.

Because that’s what we found out, through thorough experimentation in which we took turns repeatedly running in and out of the apartment while one of us banged out Chopin on the piano. The walls are actually quite solid and don’t let that much sound go through—it was the door that needed some work. Which was a relief, as we were afraid that we would have to shell out tons of money on covering the entire wall.

So while we researched materials and brainstormed a million crazy ideas, this is what we did: 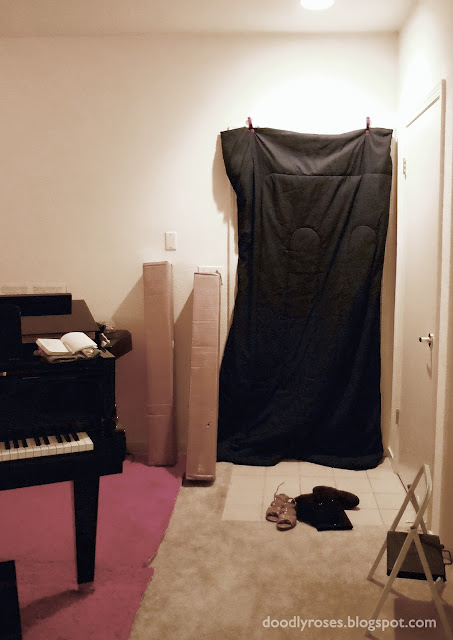 Yes, we clipped a blanket over the door. No, I don’t think it actually made that much difference.

Based on internet research, some helpful information from the university studio professor, and the few things I remembered from my physics of music class, we came up with a few layman’s-terms basic facts about sound insulation:

1. Air is, funnily enough, extremely sound-insulating; the ideal soundproof setup would be to create a “room within a room,” or to have sandwiches of air between walls. (It’s why double-paned glass, with a pocket of air between the panes, is more than twice more insular than single-paned glass.)
2. The more dense your material, the more soundproof it is. Thick concrete walls are great. Drywall is pretty good.
3. The most effective acoustic insulators are materials that absorb sound and turn it into heat.

Now, there are a lot of acoustically insulating materials on the market. There’s acoustic foam, which according to internet research isn’t all that effective, for the reasons above. I found a lot of rave reviews for Green Glue, which seems super effective but gets pricey for large areas. We found out about mass-loaded vinyl, which seemed promising, and operates on a similar concept to Green Glue.

We (and by we, I mean Bryce) came up with a design that used all three points as effectively as possible within our budget. The concept? A sliding panel that rolls in front of the door, with a frame to create a pocket of air between the door and the panel, using a layer of mass-loaded vinyl, and a panel of drywall.

This plan was particularly genius because a sheet of drywall is only $8 to $9, and we discovered that Home Depot sold a roll of 4’x8′ mass-loaded vinyl for $29.99, which is insanely cheap compared to pretty much everything else we were looking at. We ordered two rolls—one to go in the panel, and one to go between the two rugs under the piano. (We live in a third-floor apartment, so we have to be considerate of the person who lives below us, or something.)

Anyway, enough talking! On to the pictures, which tell the whole story: 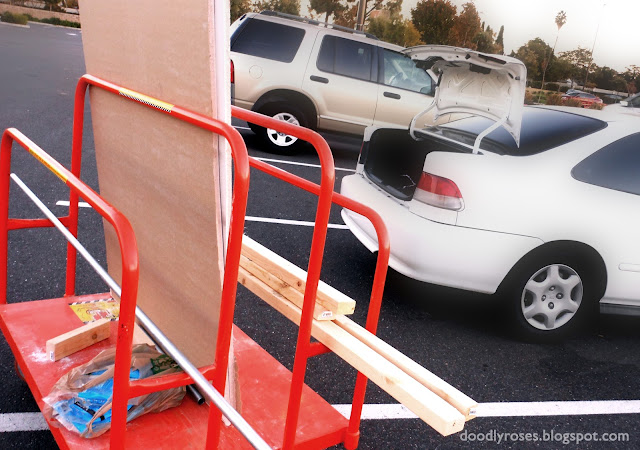 The materials, ready to be loaded up into my little car. Bryce had to take the drywall back into the store to be broken up into little pieces because they didn’t fit, even with my back seats folded down. 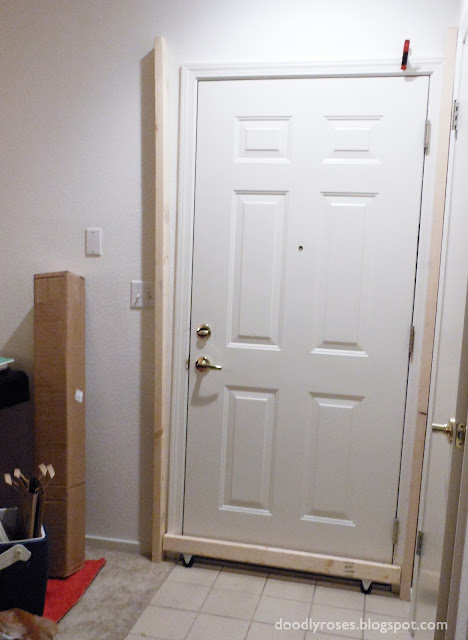 The wooden frame on load-bearing wheels, lined up against the door. 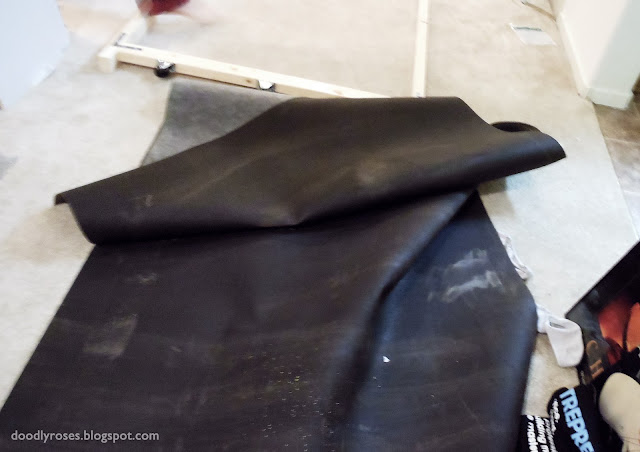 This is what mass-loaded vinyl looks like. It is one heck of a [WORD THAT SHALL NOT BE PUBLISHED ON THIS BLOG] to work with. The stuff is dense—it’s so heavy that just getting it laid out flat on the floor is a significant endeavor. But it magically absorbs sound, so…worth it? 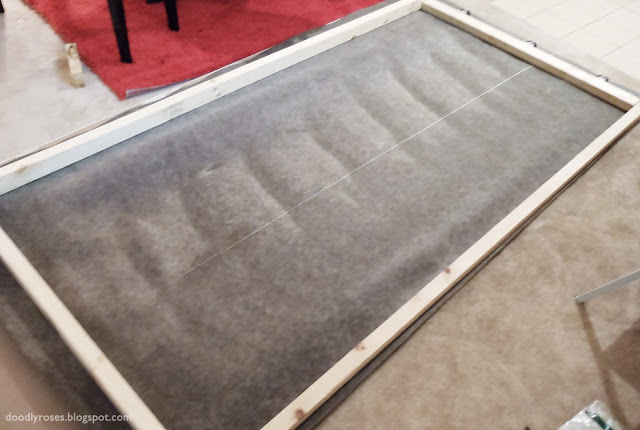 The frame sitting on top of the vinyl. 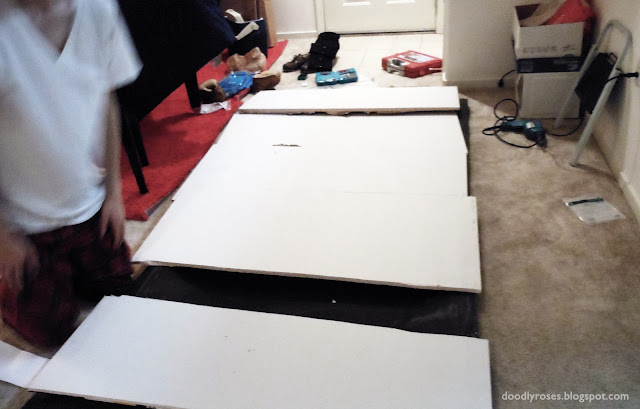 Laying out the drywall pieces over the vinyl and the frame. 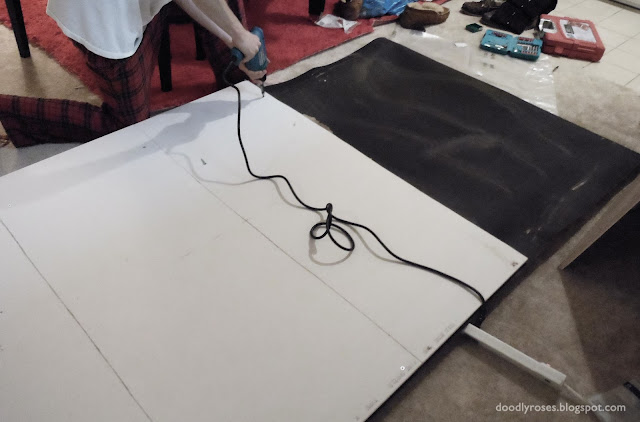 Drilling them in. Thanks to a number of factors, Bryce had to take all the screws out, adjust things, and screw them back in, at least twice. Splitting a solid sheet of drywall into five pieces, and then trying to put them back together, greatly complicates matters, believe it or not! 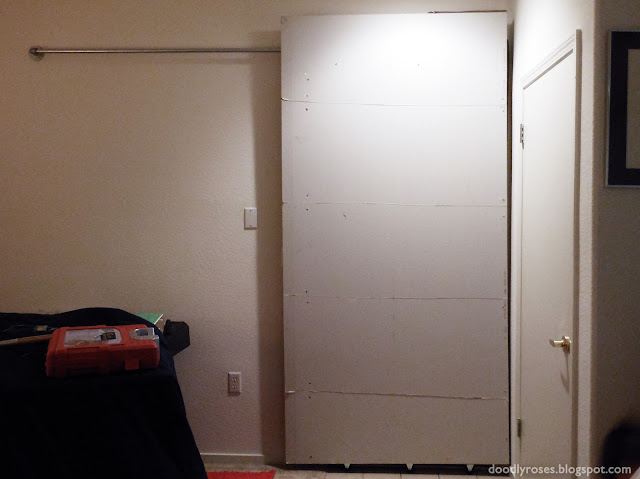 There is something quite apocalyptic about having a giant ugly screwed-together panel covering your door. This thing is eight feet tall, so it was quite formidable and eye-torturing in real life. Oh, and I forgot to mention—there’s a metal hook on the inside of the panel, and it keeps the thing on that industrial steel rod that Bryce put together. No, we’re not sure if screwing giant steel elbow-joints into the wall is allowed in our lease, and we don’t care because THAT IS HOW WE ROLL. 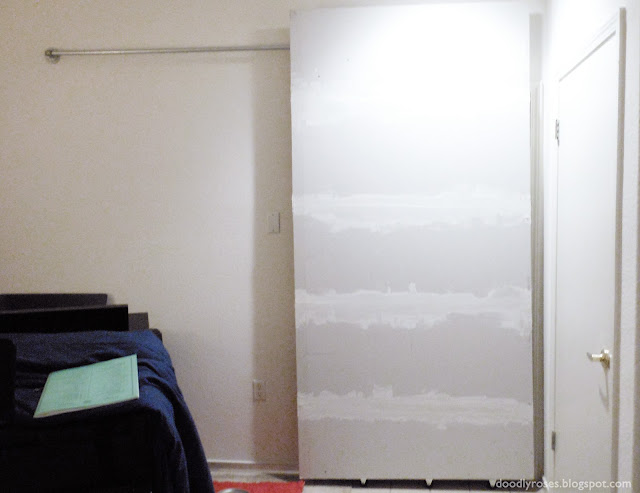 Here’s a pro tip—if you need a sheet of drywall in one piece for your project, save yourself a lot of trouble. Borrow someone’s van or truck and just haul it in as one piece. Not only did breaking it into pieces make construction surprisingly headachey, it also meant we had to buy all sorts of additional supplies to join the pieces back together, and it delayed progress by…a lot. This is what it looked like after the first layer of joint tape and joint compound, and before extensive sanding. 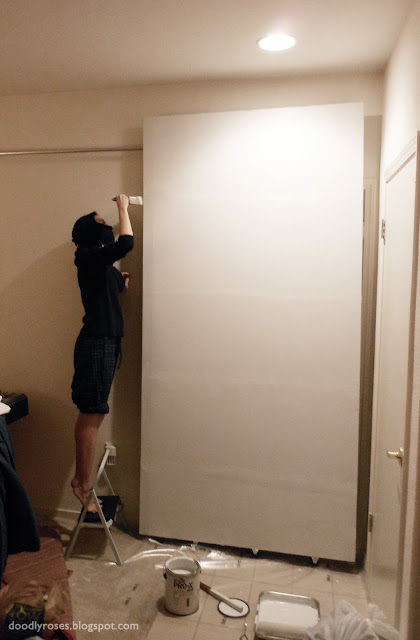 Bryce had the genius idea of turning our giant behemoth of a soundproof sandwich into a functional chalkboard—this meant that we had to prime the thing. The primer we used had crazy fumes, so I tied a T-shirt over my face as a mask. Bryce thought it would be funny to take a picture.

And then…we painted it! With chalkboard paint! 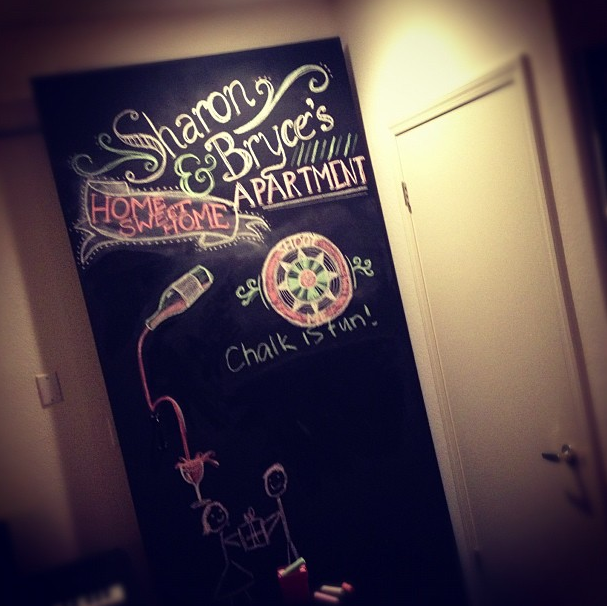 And this is what we ended up with—a lovely, humongous sliding chalkboard that lives a secret double life as a soundproofing panel over our extremely acoustically-leaky door. It’s pretty effective; it doesn’t block 100% of the sound, but when you’re outside, the sound of the piano is very faint (!) and when a car drives by, it drowns out the piano. (!!!)

(We also got cheap weatherstripping foam and sealed in all the space in the doorframe; it made a big difference!)

An added bonus: the neighbors across the hall have an extremely stir-crazy German shepherd that stays in all day and barks manically, non-stop, from early morning until past midnight. I have no idea how that thing is able to sustain such dedicated barking without stopping for oxygen. But when we’re inside the apartment with the panel over the door, we totally can’t tell that the dog exists. It’s magical.

Oh, and we haven’t gotten any complaints about the piano.

5 thoughts on “How to Soundproof an Apartment with a Piano; Unsolicited Love Advice”