I, Sharon, am what is known as a Bad Blogger. I fail to blog frequently not because I have nothing to talk about or no interesting things to report or any deeply original thoughts to share. Over the past several weeks I have thought of about fifteen different things to write about and mustered up the energy to actually write none.

So it’s a little embarrassing when my dear boyfriend, who has taken to blogging with alarming gusto, diligently takes photos, writes blog posts, rattles off a list of upcoming post subjects in conversation, and—get this—has enough posts prepared to set several to auto-publish so that they appear spaced evenly throughout the week. This will not do, boyfriend. I can blog too.

So without further ado—today we went to the Alameda Point Antiques Faire, which occurs only once a month and is big enough to convince you that one could very plausibly repopulate the earth with antique buffs and hipsters. The website boasts that there are 800 sellers at the fair(e), but I’m fairly sure I entered a wormhole into a universe of infinite booths, because I found myself standing in the middle of the grounds and seeing what looked like miles of tents in every direction. We spent more than four hours there and barely saw half of what was there.

For two antique-buying greenhorns, Bryce and I did exceedingly well. I won’t spoil his fun by reporting what he got (as you might expect, he’s got a number of blog posts planned over this) and I’m proud enough of my little haul to spread it out over several posts.

So! If you ever find yourself at one of these antique shindigs, here’s a tip—you will get great deals at the end, when all the sellers are packing up and are tired and want to get rid of their stuff to the point that you could probably buy George Washington’s teeth for two cents. As sellers loaded their costume jewelry and typewriters and mahogany dressers into trailers, we somehow ended up in a little tent full of shoes. It kind of felt like this:

I’d been looking at vintage shoes and struck out all day. Maybe I have stupid taste, but I’m not a fan of the pointy-toed d’Orsay thing that all vintage shoes seem to have. But this tent—it was magical. Shelves of shoes of all different styles, many of designers I’d actually heard of. I made a beeline for one shelf and saw one thing: a pair of gray suede pumps with solid wooden heels. I’ve been wanting a pair of gray suede heels forever.

I couldn’t tell, just looking at them, what size they were supposed to be. My shoe buying experiences are somewhat limited to 1) filtering online selections by size and 2) spotting, in budget-fashion-ish stores (Ross, TJ Maxx, et. al) lonely left shoes plastered with giant “6.5” stickers wedged between a half-empty Burger King cup and a misplaced sneaker.

The tent owner, a kindly gentleman, came over. “They’re organized by size,” he said, gesturing proudly to the shelves.

“Where are the six-and-a-halves?” I asked, hopinghopinghoping and picking up the gray suede pumps. The soles bore Cole Haan’s logo.

“Well, these are the size sixes,” he said—my heart fell a smidge—”but a girl tried that pair earlier and said they ran big”—yes!—”so they’ll probably fit you if you’re a six and a half.” Thank you, fellow tiny-footed girl!

(Just for the record—yes, despite being reasonably tall, I have little feet, and sometimes even 6.5 shoes are too big for me.)

I tore off my sandals and stuck my foot in. The angels sang. I slipped the other shoe on and hopped around on the pavement. The four-inch heels felt like nothing. Guys, this is what happiness feels like.

“Looks great. She could be a foot model,” Shoe Gentleman said to Bryce.

Flattery aside, I knew the pattern. Girl finds shoes, shoes are perfect, shoes are expensive, girl leaves shoes, girl is sad, roll credits. “How much are they?” I asked Shoe Gentleman.

I could see Shoe Gentleman’s brain whirring as he quietly weighed the situation. Whir, buzz, clank.

“Yeah,” he said reluctantly. I knew not to push it. If I were my mom, I could probably have bargained my way down to nothing, but hey, I should support the local economy. I kept my face impassive as I dug around for my cash, but inside I looked like this:

As soon as I returned to the land of internet, I did some frantic Googling and discovered three things: 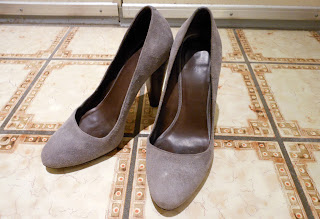 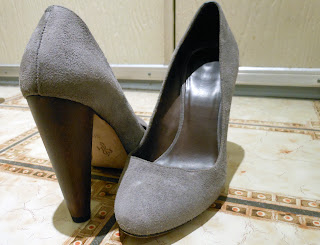 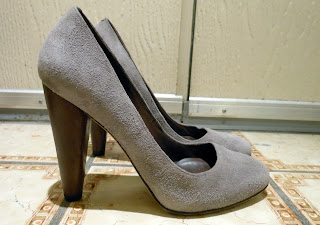