I had very little inclination to see the live-action Beauty and the Beast after seeing multiple clips and hearing half the soundtrack, but as it so happens I am in love with a certain someone who wanted very badly to see this movie, and we all make concessions in the name of love, as clearly demonstrated in the aforementioned movie. I have many strong opinions about so many things in this movie (then again, I have strong opinions about basically everything), but these are the three things I have deemed The Most Important Problems.*

*Those of you who know me may be surprised that the aggressively mediocre singing is not one of my three Big Problems with this movie, to which I say this**: yes, the bland auto-tuned, digitally constructed lifeless android singing voice of the otherwise lovely Emma Watson is cringe-worthy, and Gaston’s lack of deep baritone goodness is a crime, but Disney was kind enough to warn us all going in by pre-releasing recordings. Hats off, actually, to the sound engineers, who are the real heroes for creating something out of almost nothing and preventing this from becoming a Les Miz/Mamma Mia/Phantom of the Opera-level, aurally offensive mess.

**I told you I have very strong opinions about basically everything.

Problem the First
Before the “Be Our Guest” scene, the harpsichord comes out to play and the other enchanted objects urge him to play more quietly. “Sotto voce,” the harpsichord responds in confirmation.

HARPSICHORDS HAVE A FIXED VOLUME AND CANNOT PLAY MORE QUIETLY AND THE HARPSICHORD HIMSELF SHOULD KNOW THAT. SHAME ON YOU, HARPSICHORD.***

***”But it’s a double-manual harpsichord, so he could simply play the quieter manual and that would count as playing quietly!” you protest. That was my thought too, reader, but I’m pretty sure I saw both manuals going so either Mr. Harpsichord is full of it or he’s just too fed up to correct his friends.

Problem the Second
Yeah, it’s the harpsichord again. In another moment in the movie, he plays the theme from the “Funeral March” movement of Chopin’s second sonata as a gag.

Excuse me, but the movie is pretty clearly set in the baroque era, SEVERAL HUNDRED YEARS BEFORE CHOPIN, AND THEREFORE THIS THEME, EVEN EXISTED. #SORRYNOTSORRY FOR THE CAPS LOCK, THIS PARTICULAR ANACHRONISM REALLY IRKS ME.

Problem the Third
Finally, not a harpsichord problem! In the closing ballroom scene, it appears that the violinists are playing with modern and not period bows. For a movie that took such great pains to make a period-appropriate harpsichord come to life, it’s a real shame they couldn’t rustle up some period bows for the violinists. ARE THE VIOLINISTS TIME-TRAVELERS? EXPLAIN YOURSELF, DISNEY!

That is all. I bring this post to you because the internet is already saturated with a deluge of thinkpieces about whether this remake is too derivative of the animated original, whether LeFou’s outrageously rampant gayness is awesome, terrible, or will cause the world to implode upon itself, how the movie is too feminist, how the movie is not feminist enough, etc. etc. etc. I can promise you that hardly any of these essays will talk about accuracy in harpsichord portrayal, or musical anachronism in a movie where none of the musical numbers are remotely close to being in the baroque style. So here I am, a random person with strong opinions who picked a weird hill to die on, to offer my thoughts. You’re welcome, internet.

But Disney, I have to give you credit for featuring a harpsichord as a character. A+ for effort in raising harpsichord awareness.

Ladies and gentlemen, it’s Paper Voodoo Monday! No, PVM is not an established event, nor do I promise to make it a recurring thing, but Paper Voodoo Monday sounded kind of catchy.
Anyway, a few years ago I picked up one of these kitschy pads by Knock Knock. If you ever find yourself feeling fairly ticked off at someone, you can mete out their punishment in a way that won’t get you a prison sentence.
The past two-ish weeks, I’ve been engaged in an unnecessarily drawn out, frustrating saga involving a $1.99 pack of batteries I ordered from a seller on Amazon—because I am basically a piano-cuddling hermit and it’s too much trouble to go get batteries from the store. What followed my order was what shall be henceforth known as the Great Battery Saga. I won’t go into detail, but let me say it’s one of the worst customer service wild goose chases I’ve had, involving nonexistent tracking numbers, delayed shipping, shady emails with incorrect grammar, etc. etc. etc. etc.
The batteries finally came today (stuffed in a regular letter envelope, to boot) and I’m going to write “National Deals” a bad review. But what is the fun of having to recount the Great Battery Saga, inciting the wrath of shady internet sellers, and martyring myself for the cause of warning people not to give these jerks money? I’m going to enact my own revenge: 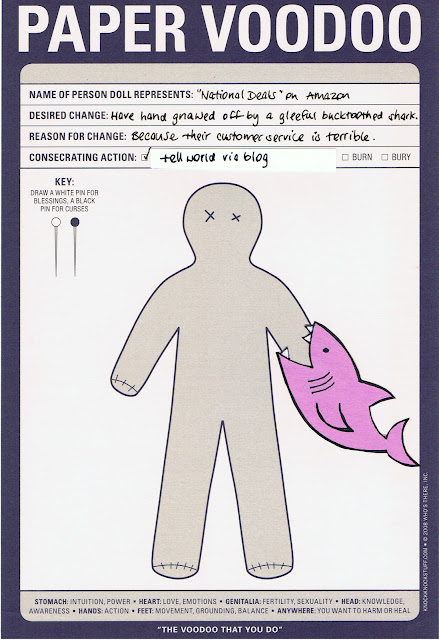 I decided, for no reason, that their fair and reasonable punishment would be for a tiny purple happy bucktoothed shark to attack their hands (if there are several people behind this operation, each of them shall face the wrath of my imaginary hand-loving shark).

There. I feel better.

Remember the 90s? Remember when Gmail didn’t exist, and people actually had AOL and Hotmail email addresses, and every day you’d get a chain letter plopped in your inbox imploring you to save the bonsai kitten? And everyone had these ridiculous quotes in their signatures ~_*+tHat lOokED lyKe tHiS+*_~, and we all thought that if we forwarded this email to ten thousand people, Bill Gates would give us all $100?

I thought we’d learned from that. But like everything else in life, stupidity endures, and my social networks are not messageboards of my friends’ lives so much as they are a platform for the dumbest things to get shared and re-posted, in a terribly real satire of what happens when you enable mankind with free, fast communication. 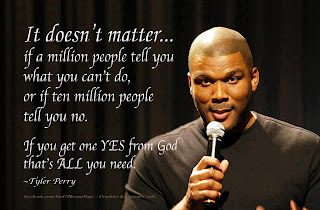 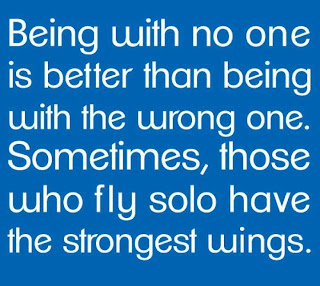 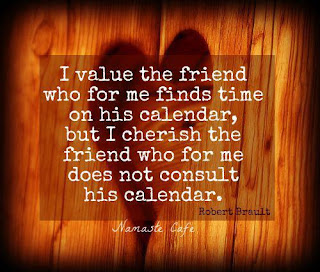 And, at worst, these things are inaccurate and damaging:

Okay, so Facebook is now taken over by dumb people who wouldn’t know good typography if an ampersand hit them in the face. Over to Google+, where none of the few people I have chosen to follow there believe in re-posting this stupid nonsense.

But wait! Google+ now shows me “What’s Hot,” which is the stuff that gets chain-emailed around by people I have absolutely no connection to. Which is why I now log in and see this: 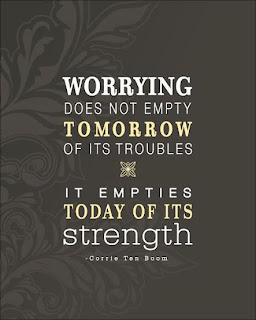 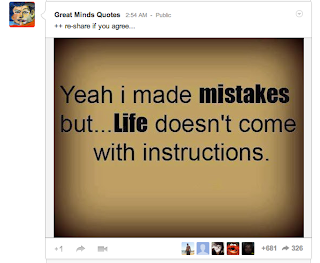 What the hell, Google+? The whole point of using you is so I don’t have to deal with the stupid people I know on Facebook! Why do you feel the need to show me stupid stuff made by stupid people I don’t even know?

My conclusion? Misattributed quotes, terrible design, fake stories, and saccharinely trite sayings are always going to persist. Scientists could invent a way for us to beam thoughts right into each others’ heads, and while a few people will use this in a groundbreaking educational way, the majority of them will be beaming “~Life isn’t measured by the breaths you take, but by the moments that take your breath away~ (George Washington)” into each other’s craniums while they walk their holographic robot dogs.