One exciting (for me) development in my life right now is my epic search for THE ONE. And when I say “The One,” I’m not talking about silly things like soul mates or…whatever else people consider important. No, this is something of far greater consequence—a piano.

For the past two years my family has had the honor of “piano-sitting” someone’s Kawai grand piano. It had wonderfully weighty keys and I gave it plenty of exercise while we had it. I also had some trivial moments with it: 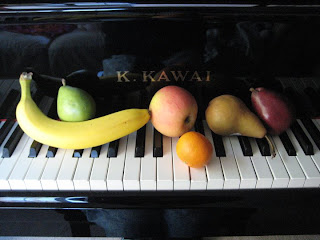 I know that most people are not going to get the joke, so here it is: Johann Kuhnau (1660-1722) was a Baroque composer who wrote a number of pieces, and he had one collection of six pieces whose title, translated, is “Fresh Keyboard Fruits.” I am weird and find that hilarious, so one day I took six fruits, piled them on the keyboard, and voila! A visual pun that only, like, five people in the world will understand.

Anyway. That piano went back to its home, where I bet you no one is playing Prokofiev on it anymore, and I have been left with one earnest but unsatisfactory Yamaha upright whose keys feel like mush. I feel like I’m Michael Phelps trapped in a kiddie pool, Michelle Kwan with nothing but a pair of Heelys, Picasso with a crayon, etc.

So I’ve been on the hunt for a grand piano, the piano that will be my closest friend and confidante, my true love. And if you think this is totally weird, then just stop reading my blog already, because you will never understand me.

One of the many things I’ve learned from Harry Potter is that the wand chooses the wizard. I feel that it’s the same with pianos—you have to get to know them, have a conversation with them, engage with them and see if the piano will like you. See if there’s potential for a great relationship there, or if it’s going to be one of those unhealthy unbalanced relationships that cause people to write convoluted letters to advice columnists. (“Dear Abby, my piano and I have not been getting along…”)

And one thing I’ve discovered is that in the piano world, I am one of those girls who falls in love with what I can’t have. Last week I found a beautiful, sonorous Bösendorfer 185 that was so responsive to my fingers that it practically did half the work for me. It cost a flobbity-jillion dollars, so I had to say goodbye and leave it.

Today I tried another Bösendorfer, and it was the Strauss model, which looks like this: 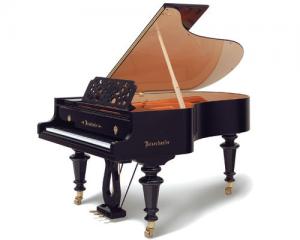 I know that this doesn’t look all too unusual, but it’s a real sight in real life. As I walked towards it, I didn’t see a piano. I saw this: 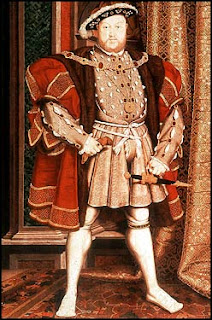 That’s Henry VIII (he of the six wives). I found this particular piano to be very much like the English king. His its touch proved that he it was easily seduced and its sound had quite a bit of snob-nosed puffery to it, but like Henry VIII, who was said to have a thin, reedy voice, this piano had a sharper, thinner tone than the Bösendorfer I loved.

I did find a wonderful piano today that I loved. Gorgeous deep, rich bass—like I was playing with Thor’s hammer—and a high treble that, when I played Prokofiev, had a sharp bite without being shrill. This piano knew how to play the hard-to-get game just right; the keys were responsive and quick but just firm enough to keep me working. Schumann sounded wonderful on it. So did Chopin, Beethoven, and Debussy.

The problem was that it was a Steinway D. As in, a concert grand. As in, nine feet long. I knew that if I was foolish enough to take this piano home, it would spend the rest of its days crying at being stuffed in a suburban living room, its potential wearing away under a popcorn ceiling and its sound wasted in a room with substandard acoustics. And worse, if I ever had the piano moved to future apartments and living rooms. Unless someone lets me live in a concert hall (that actually would be really great, not going to lie) there is no way I could take a concert grand home.

And so I continue my piano hunt. Every time a piano and I fall in love and I cannot take it, I feel like the tragic heroine of an epic romance, doomed to walk the earth alone.

But I will persist! The One is out there! It’s waiting for me, and eventually we will find each other.