Skip to content
On Saturday I had the opportunity to explore the city by myself. (This was the same day that I tried an Austrian Big Mac and found a discreet painted street symbol.)
It was a day of hilarious mishaps, related to my inability to navigate a world that isn’t filled with signs in a language I can read. At McDonald’s I opened the door to a private office because I thought it was the bathroom, and I walked into an unyielding board because I thought it was a door. At H&M I got stuck on the men’s floor because I couldn’t find the exit, and in my attempt to get out got myself stuck on the children’s floor. Then I got stuck on the men’s floor again. After I finally asked for help I almost opened an alarm-rigged emergency exit.
After some time I just wanted to sit down and rest and not be tripped up by my inability to function in German. I walked aimlessly down a block and saw Cafe Tomaselli, which I’d already been to. Then I noticed that near Cafe Tomaselli was a little building with a fenced seating area, called Kiosk Tomaselli. I guess it’s a little add-on to the original cafe?
I wasn’t actually sure what it was, so I walked in, and asked a tux-clad waiter, “Do you serve coffee here?”
Which, in hindsight, is probably the stupidest question to ever be asked in a cafe. To his credit the waiter answered me without laughing. It made me wonder if stupid tourist questions were the norm. I sat down outside and proceeded to be confused at the menu. 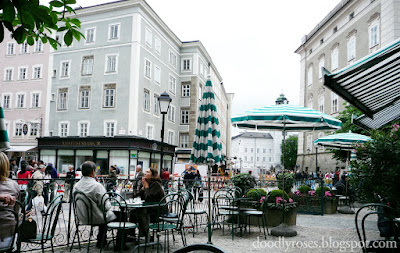 I wanted to try a coffee, because my boyfriend, CEO and food-blogger extraordinaire, had told me that I absolutely had to see what Austrian coffee was like. I’m not a coffee drinker, so thanks to being coffee-illiterate and German-challenged, I didn’t have a chance of understanding the menu. 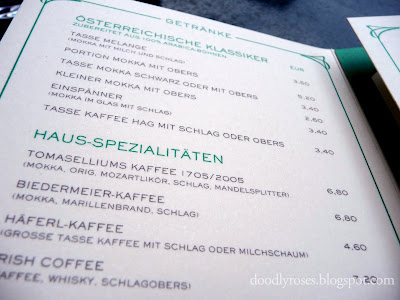 When the waiter came, I pitifully pointed to the very first thing on the menu without knowing what it was. I got the Tasse Melange, which according to the description is a mocha with milk and “schlag.” I had no idea what schlag was. Google tells me now that schlag is whipped cream. 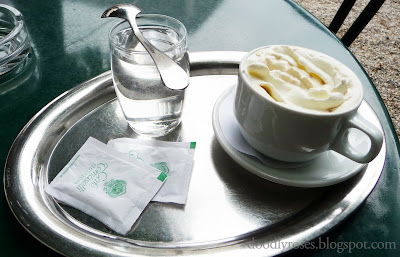 My coffee arrived very quickly, on a silver tray with a small glass of water and two pretty packets of sugar. I could only assume the water was for drinking…? I hope there isn’t any cultural practice I’m missing out on in which you use the water to wash your spoon, or baptize the nearest infant, or something. In any case, I drank it. 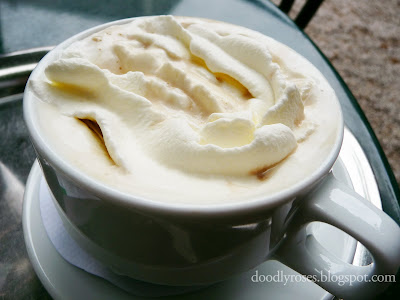 I first tried the coffee without sugar, and it was good—rich, complex, and slightly bitter. Then I dumped in both sugar packets and it was delicious. Coffee purists everywhere, you may shudder. 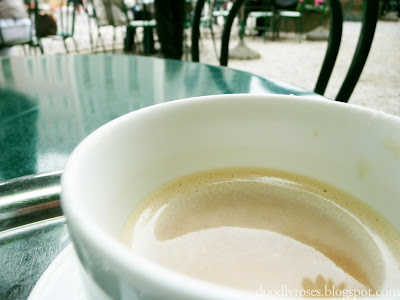 I sat outside, sipping my coffee and reading Casanova’s memoir until it was time to go home for dinner.