Last semester, I was studying for a big music history midterm, which focused mainly on the Baroque era. As my roommate and I quizzed each other late into the night, my tired tongue slipped and I asked a question about the “Barack Period” instead of the “Baroque Period.” We laughed at that, and then I said “Ha ha, BAROQUE OBAMA!”

Of course we laughed hysterically, and to top things off I spent a good two minutes Photoshopping Barack Obama’s face onto that really famous portrait of J.S. Bach, and posted it on Facebook to great acclaim. (From there it moved on to Ben’s blog.)

Of course, I decided that it was imperative I show this to my music history professor, so I printed out Baroque Obama. The next day, as we trooped into class ready for the midterm, I went up to Dr. W and said “Look Dr. W, I made you Baroque Obama!”

Now, Dr. W is a fairly serious woman. But when I handed her the printout, she burst out laughing harder than I have ever heard her laugh. People’s heads whipped around, surprised, and the guy sitting next to me turned to me and said, “I have never, ever seen her laugh like that. I applaud you.” And he did.

And that is how Baroque Obama came about. 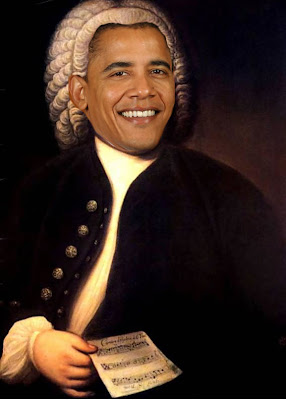