So after the initial excitement of seeing that article faded, I shrugged and moved on to practicing and obsessing over Mendelssohn. I purposely didn’t read the comments, since I knew they’d be full of angry people insisting that women aren’t equal, that rape is just punishment for bad behavior, etc. and there would probably be some personal attacks in there. Basically, the typical stuff that comes up whenever anyone stands up shouting that everyone should be treated equally and with respect.

Unfortunately some people, who I will now officially refer to as “douchebags,” have decided to chase me back to my personal Tumblr and purposely try to…I don’t know, make me angry? Waste my time? I’m really not quite sure what their points were.

(I really hate that I have to say this, but I have my suspicions: if you’re someone I actually know and you did this, that is really cowardly and I am disappointed in you. I’m not above having a mature, rational dialogue about this.)

Here’s what one douchebag posted to me through that “ask” feature:

um about the short skirts don’t rape picture. Who is more likely to be raped? A girl wearing a short skirt/dress showing cleavage or a girl who’s fully covered up? HUH? WHO? I have made my point. Of course, there’s exceptions, but if you’re out clubbing at 3am and you’re dressed like that, don’t be surprised.

(Clearly they didn’t even bother to check out the site! Sad face. I also love how they think that they can make a point by presenting a non-fact.)

Here was my response, which I’m willing to bet money they’re never going to see:

Actually, some researchers a couple of years back did an extensive survey of imprisoned rapists and found that rapists pick their victims based on how vulnerable they look, not on how they’re dressed.

A girl who is fully covered up but looks easily overcome will be more likely to be raped than a girl showing off her legs and cleavage who looks like she can fend for herself.

You haven’t made a point. You’re basing your conclusion on assumptions that a woman’s attire is more to blame than the sick mind that drives a rapist to commit a horrible crime.

In addition, rape is an act of dominance and aggression, not sexual arousal. If you think men rape women simply because they’re too sexually aroused to think, you must not think very much of men.

I also saw a few reactions through Twitter to the image and all I have to say is this: the small but vehement negative reaction to Equality Within Reach‘s message only proves why I had to do this project. If all that site got was a resounding “Meh, this isn’t an issue anymore,” then there wouldn’t be a need. I’m overall pretty happy that I’ve found a way to stand up and speak out, and as long as gun-toting bigots aren’t stalking me, then I’ll take whatever backlash comes with it.

But this is me; I tend to have weird reactions to things, and I found it kind of funny, actually, that there are still people who think that a woman’s clothing can be so provocative that it overcomes a guy’s rational thinking and “forces” him to sexually assault someone. A possibly-distasteful comic was born. (I think Blogger sizes this down, you’re going to have to click on it. Sorry.) 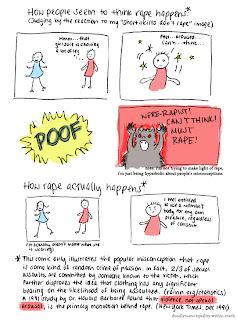